Here's my second week journal entry for the Rapid Product Formula program by Nicole Dean and Ronnie Nijmeh. This week's adventures include gourmet brownies. Read on to learn why. 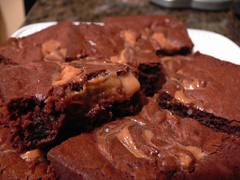 Here's a video I created especially for Nicole Dean and Ronnie Nijmeh, creators of the Rapid Product Formula program.

Week 2 is all about the second part of the formula: Rapid Product.

The RPF program is all about getting a product out there fast, not spending months and months writing and perfecting it.

Of course, Nicole and Ronnie do not advocate selling a crappy product. They're all about getting started with a good-enough product. Start profiting from it, and improve on it along the way. Kinda like software. Microsoft releases version 1.0, and then version 2.0 and so on.

Same thing with your infoproducts.

Before I started the RPF program, I had:

After going through the exercises in Week 1 of RPF, I decided to use the program to finish one of my unfinished infoproducts.

I started working on an ebook last year. It was a PLR ebook that I started to rewrite it to “nichefy” it, or make it focused on my particular niche.

Somewhere along the way, I lost steam. Part of it was because it wasn't shaping up to be a product I could really be proud of. Part of it was getting overwhelmed because I knew it needed additional research to get really good. And most definitely, part of it was the fear that I would not sell a single one of that product.

Week 2 of RPF helped me to:

(Note: Nicole and Ron do NOT teach coming up with a product as complicated as mine. I'm just an over-achiever 😉 Besides, since I've produced a couple of infoproducts before, I feel confident that I can pull this off.)

I'm excited about my infoproduct again!

In fact, I've begun editing it and I'm about 70% completed. As for the research, I hired a VA to do it. She got it done in a couple of hours, while I worked on client projects. I also know whom I'm going to interview for the webinar. Now all I have to do is contact her and get it scheduled.

So What About the Gourmet Brownies?

Oh yeah, the brownies. Here's the thing: Ronnie and Nicole have a contest going on with RPF participants. We send in our progress reports every Friday. They pick one winner who has taken action and made significant progress for the week.

Yes, yours truly. I'll let you know how the gourmet brownies are.

Who would have known gourmet brownies could be so motivating? Seriously, it wasn't the brownies. It was knowing that somebody was out there keeping track of what I was doing. That has been a motivating force for me.

Which goes to show that sometimes, you cannot do something on your own. I'm a do-it-yourselfer through and through. And yet, I can sometimes (ok, often) get in my own way and get stuck.

However, because there's somebody keeping tabs on me–with or without gourmet brownies or a whip in hand–I can find the extra energy, strength and courage to forge through my roadblocks. That's important to discover about myself, too.

Next week, I'll let you in on the SP part of the formula, Sales Process. Watch out for it!

Do you have any tips for me? Or any questions? I'll be happy to hear them!

PS: Ron and Nik will open up Rapid Product Formula again, I just don't know exactly when. For one thing, Ron's getting married this year (that's gotta be more important, right?). If you sign up for the free video here, you'll be notified when they do.

How to Sell Your Information Product on the Internet: Week 3 of the Rapid Product Formula

Can You Really Make Money Doing What You Love?

Help the Flood Victims in the Philippines