Online Marketing Success Lessons from “The Next Great Baker”

I have a mild obsession with baking, so I watch a lot of baking shows.

Since I always want to make my time as productive as possible, I found myself extracting marketing and success lessons from “The Next Great Baker.”

During the last episode, when the contest was down to three bakers, I knew way ahead of time which of the finalists would be kicked off. It was clear from her attitude and behavior that Corina was not cut out to be a winner.

Online marketers and anyone else who's trying to build a successful business have much to learn from Corina's mistakes.

1. She focused too much on what she didn't have.

In the final challenge, the bakers had the assistance of Buddy's sisters and other staff. Unfortunately for Corina, Madeline, who was supposed to help her sell her baked goodies, arrived late at the bakeshop. Corina fretted and worried about this, instead of focusing on the task at hand and even coming up with a Plan B, in case Madeline was a no-show.

In contrast, Dana, whose cake designer was away for several hours the night they were supposed to be baking up a storm, hardly complained. Sure, you could tell he was worried, but he didn't let it get in his way. Instead, he took a chance and let one of Buddy's sisters, Grace (who was notorious for NOT knowing her way around the kitchen), take on some baking tasks. Buddy thought this move would hurt Dana, but in the end, this gamble paid off.

As online marketers it's easy to feel we can't take the next step until we have everything we need. Perhaps it's that new video camera that's keeping you from creating more YouTube videos. Or maybe you think you can't finish your ebook until you have a better computer. Or that you can't attract tons of traffic until you've had a designer create a whiz-bang header and logo.

Scrap all that! Successful online marketers take what they have, make the most of it, and make money while their competition is waiting around for the perfect circumstances to arrive. Don't focus on what you lack. Focus on the resources you do have and see how far you can take them. 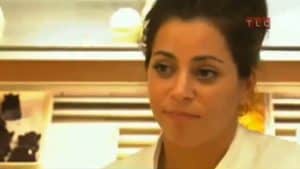 2. She delivered only what was required.

In their final challenge, the finalists had to bake x number of cakes, pies, cookies and cupcakes to sell in Carlo's Bake Shop the next day. Corina baked the required number but her competitors, Megan and Dana, baked a lot more! Which made total sense, because the challenge was to sell the most number of baked goods the next day.

As online marketers, we need to “wow” our prospects and customers by always over-delivering, giving more than they expected. This is true for the things you sell. You want your customers to feel they got more than their money's worth. But it's also true for the stuff you give away. The response you want is, “Wow, if her free stuff is this good, the things she charges money for must be even better!”

3. She compared herself to others.

As soon as she saw her competitors' displays Corina immediately felt inadequate. Of course, one reason was because Dana and Megan baked a lot more goodies than she did! But the worse part was, this made Corina feel that she didn't measure up. Her countenance fell immediately. How did she expect to sell her baked goods looking like that?

Online marketers can spend all day comparing ourselves to others. Most of the time, it's a useless exercise. We'll always find some people who are a lot better than us. And we'll also find others who are a lot worse. It's only useful if you're studying your competition so you can better understand your market and brainstorm ways you can better serve them. But if looking at the competition will only make you focus on your shortcomings, then forget it! Your prospects will see that you don't have confidence in yourself and your products/programs, so why should they waste their time with you?

4. She forgot her customers.

Bent on winning, Corina forgot that she had to please the customers and judges of the show. She was wasting time measuring herself against her competitors when, instead, she should have been thinking of how to impress Buddy and his bakeshop customers. At one point, Corina was frozen wondering, “Should I stay in the bakeshop or go back to the kitchen and bake some more?”

The worst mistake an online marketer can make is losing sight of his customers. Everything we do should help us get to know our customers better, know what they're looking for, what their goals are, and get them closer to those goals.

The challenge for the finalists was to sell as many of their baked goods as possible. Instead of selling at the storefront, Corina went back to the kitchen to bake! She thought, “Oh, Madeline is good at selling. I'll leave her to do that while I go to the back and bake some more.” Buddy coaxed her out of the kitchen, but in the end, it was too late. Corina ended up selling a lot less than Dana or Megan did.

The lesson for online marketers is, “Always be selling.” Remember that saying? It's not as if you be like a vulture ready to pounce of anybody's wallet. The point is to know when the opportunity for a sale exists and always be ready for it. For example, is your website optimized to turn readers into subscribers? Are your emails written so that, when your subscribers are ready, they can buy stuff from you? If your audience expresses a need, do you respond with a recommendation for a product, even if it's not your own?

It was no surprise when Buddy sent Corina home. She did not have the attitude or behavior of a winner.

And The Winner Is…

But what tipped the scale between Dana and Megan? They both showed amazing attitude and talent throughout the contest. Megan's cake was preferred by the final client (no less than the Mayor of Hoboken, New Jersey), but Dana's cake was better according to Buddy's Mom (“the REAL cake boss!”). So why did Dana win? I think in the end, Buddy chose the person he liked more. Perhaps he thought Dana was a better fit for Carlo's Bake Shop than Megan was.

There's another lesson for us online marketers here. “Liking,” one of the elements of persuasion, is a powerful motivator. No matter how rational or objective we like to think we are, in the end, our emotions influence our actions. The bottom line is, we buy from people we like.

Dana's winning attitude was also evident when he said in a recent interview, “You get in this business to make the customers and the people happy, so winning was just an extension of that.”

It's like high school all over again. But this doesn't mean we should bend over backwards trying to please everyone. If you can only learn one thing in high school, I hope it's that you can not please every body. Instead, you just have to be yourself. When you're being yourself, you naturally attract the right people, and they'll like you without you having to try so hard.

Are you making the same mistakes in your online marketing as Corina did in competing?

Which of these lessons are most valuable to you and why?

Service Providers: Get Out of the Feast-or-Famine Cycle

Previous Post Stop Being A Slave To Your Blog Next Post Book Review: Problogger’s Guide to Blogging for Your Business